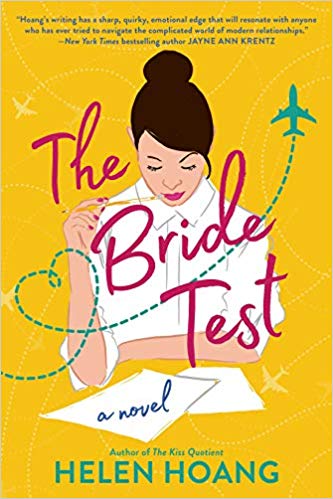 This is a followup to Hoang’s first book, The Kiss Quotient, which I liked and reviewed. The Bride Test feature’s Khai, the cousin of Michael from The Kiss Quotient. Khai’s the other character from that book who’s on the autism spectrum.

I liked Esme, the heroine, from the beginning—she’s hardworking and unpretentious, unlike all the other women Khai’s mother is trying to pick from to be his future bride. That’s the setup—she’s gone to Vietnam to find a wife for him, unbeknownst to him. Esme’s cleaning the hotel bathroom across from the room Khai’s mom has reserved for interviewing the candidates. After not finding anyone, she “interviews” Esme and finds her suitable. Esme’s current life isn’t amazing and she thinks that if she could get to America, she’d have a greater chance of making it that way. So she agrees to a trial run over the summer and leaves behind her mom, grandma, and young daughter. (I have to say that if I hadn’t known it was real, I would have been screaming, “No! Don’t do it! It’s a trap!” But that’s the comfort of reading a romance—nothing truly awful happens, at least not to the main characters in the course of the novel.)

I have to admit that Khai was harder to like. Now, I’m sure this is partly to do with the fact that I couldn’t really connect with him emotionally, perhaps due to his slightly stunted (but not entirely absent) emotions. But as the story proceeded, I found him more sympathetic. And by the end it was clear that he had grown at least a little (though it did take some time).

Khai’s mom moves Esme into Khai’s house with little warning, basically. She does explain the situation to him and he vows to stay away from whoever this girl is. But of course, once he sees her, she’s beautiful and he can’t stop thinking about her. For her part, Esme likes Khai despite his often odd behavior. She works in Khai’s mom’s restaurant and starts taking adult education classes. That storyline actually becomes important later, which I appreciated. Esme turns out to have a lot more to her than anyone (including Khai’s mom) expected.

If you liked the first book, you’ll probably like this one. As a side note, if you like reading about weddings, you’ll like it, as well—Khai and Esme go to a bunch. If you like heroes you have to warm up to, and admirable heroines, you should give it a try.