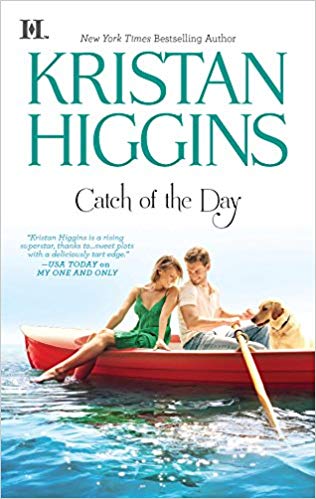 This is the first book in Higgins’ Gideon’s Cove series. This book won the RITA from the Romance Writers of America in 2008, which I think it deserved. It’s another solid Higgins emotion-fest.

Maggie hasn’t had much luck in love in her adult life, even if she is a successful diner owner. In high school, everything was great with her boyfriend Skip. But Skip turned into a jerk after college, when he came back to town with a new girlfriend in tow—all without even bothering to break up with Maggie. She was heartbroken and humiliated. Then there’s the whole falling-in-love-with-a-Catholic-priest thing. This whole tale is told in the prologue and it’s funny and you really sympathize with her and how she missed what his profession was. Totally not her fault. Of course, blabbing to everyone in town about having met someone maybe wasn’t her smartest move, but whatever. Her crush on him is still there at the beginning of the story proper and it provides awkward and amusing moments.

Maggie had a few encounters with Malone (first name unknown) and they haven't gone well. She’s sort of scared of him as he’s very gruff. But when he saves her from an awkward situation she’s been put in, she starts to look at him a little differently. And when he surprises her with a kiss—which she is surprised to enjoy tremendously—she really starts to think of him in a different light. They start hooking up, basically, and have some serious ups and downs, especially after she overhears something that makes her think he cheated on her. Naturally they get on the same page eventually, but it’s at the very end of the book. More pages of suffering than in a lot of romances (which I appreciate).

There was one thing I felt was a little unresolved. One was that Malone got really mad at her for “taking care of him” one day—cooking for him, cleaning his house up, etc.—after he’d been dragged off his boat into the sea. I never understood why he was mad at her about that specifically (I got that he was in a bad mood). I probably just missed something.

Anyway, Higgins again delivers an amusing and emotionally-drive story told entirely from Maggie’s perspective. I’m happy to report that Maggie isn’t too silly—some might think her ongoing crush on Father Tim is silly, but I get how sometimes you just can’t control who you like, so it worked for me. She’s got her requisite bad dates in there and the complicated but overall loving family. As one of Higgins’ earlier books, it’s low on the steam scale.

Overall, this is a good book that any fan of contemporary romance would enjoy. If you haven’t already read this one (I know it came out a decade ago…), go for it.