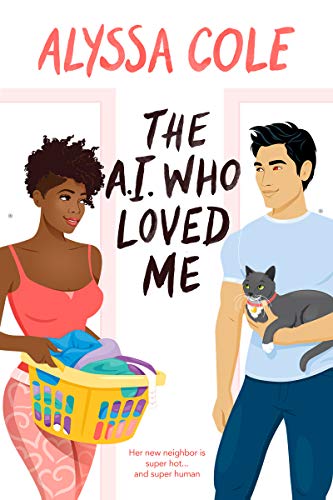 Alyssa Cole is a seriously diverse writer, in the sense that she writes so many different types of books. Contemporary romance, historical romance in different time periods, sci-fi romance, and she’s even written a psychological thriller. I personally find this really admirable.

But on to the book I’m reviewing. The A.I. Who Loved Me, the sci-fi romance I mentioned, is a very unusual book, which I'll get to later. It’s set in the not-too-distant future where artificial intelligence is fully integrated into home automation. All appliances have AI capabilities and each home has a built-in chat-bot, basically. The systems can detect emotional and physical traits in the home’s inhabitants and so on.

Trinity lives alone in her apartment, recovering from some sort of trauma. She has a therapist she sees (“sees”—she talks to her through the microphone and speaker built in to her house, rather than going anywhere). She also has a couple of good friends who come over, and she chats with her home AI, Penny, quite a bit. She has a fear of the elevator, which is related to the attack she experienced. But still, she thinks she’s doing okay. Then her older neighbor’s hot nephew moves in. Li Wei is socially awkward but infinitely appealing.

I mentioned above that this is an unusual book, and it’s not because of the story. The story is partially told through Trinity’s counseling transcripts, transcripts of other events, some unusual structured conversations Li Wei has with people, although the rest of the book is regular narrative through Trinity and eventually Li Wei.

The plot is definitely the book’s strength, with lots of questions (What happened to Trinity? Why is Li Wei so weird? etc.) that eventually get answered. It’s clear from the beginning that Trinity’s employer is maybe an evil far-reaching corporation-type entity, and we finally understand at the end.

If you are interested in AI and how it’s really going to interact with us in the future, this book shows one possibility. Plus there’s a nice romance to go along with it. Trinity and LI Wei are both likable characters, and you want to see them figure things out. I recommend this for fans of sci-fi romance in general.