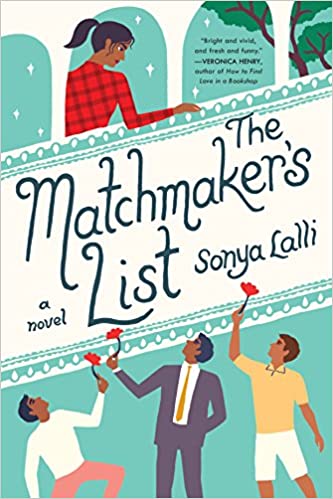 The premise of this book is simple: Raina, a half-Indian 29-year-old Canadian, has promised her (Indian) grandmother, who raised her, that she will agree to be set up on dates if she isn’t married by 30. Everyone remotely familiar with Indian culture will understand that this is a typical situation for women in their late 20s. Raina’s grandmother, Nani, jumps the gun a bit and starts harassing her early, giving her a list of suitable Indian men for her to contact and even setting up a meeting herself. Raina wants to find someone on her own, but meets some of these men, leading to some pretty funny scenes. To make matters worse, Raina’s best friend is engaged to a perfect guy, and she doesn’t seem to understand Raina’s situation.

There is actually a lot going on in the book. It shows how Indian culture operates, even in Canada, and how much unfair pressure gets put on women. Raina tries to be a dutiful granddaughter but she’s a strong, modern woman who doesn’t think that the only thing she’s good for is marrying and reproducing. She has a successful career in banking and works hard and a lot, and in many ways she doesn’t have time to date. But even more significant is her ex-boyfriend, who she’s very hung-up on. She thinks they might have a chance and doesn’t want to throw that away by settling for someone just for the sake of getting married. So the book deals a lot with the psychology of trying to please one conservative (but evolving) culture while living in an ostensibly more modern one.

I really liked the story, although there are some things that happen in the second half that I didn’t love. Raina allows Nani to think something about her that isn’t true, and Raina lets that little lie go on long enough that it hurts people. That kind of bugged me. This isn’t a romance even though it is a story about love, partially because it’s impossible to tell who’ll she’ll end up with (even though any reader would guess that she’d end up with somebody). I have to admit I felt a little unmoored by this because I wasn’t sure who to care about besides Raina and her family and friends. What guy should I root for? I had no idea. And the romance with the guy she does finally end up with felt a little forced. I didn’t really see their attraction build like I would have liked. Though to be fair, I did really like the guy (much better than the ones she passed on!).

Despite having those qualms with the story, I think Raina herself is a wonderfully complex and likable character. The other main characters (primarily her friend Shay, Nani) are also interesting and well-depicted. There’s some good conflict with both of them that felt very realistic and it was satisfying to see it resolved.

In summary, if you’re curious about/interested in Indian culture in Canada and America, this will definitely educate you while keeping you entertained with a good story. I imagine it’s probably also especially popular with any second-generation+ immigrants who have to deal with two worlds the way Raina does. It can’t be easy.