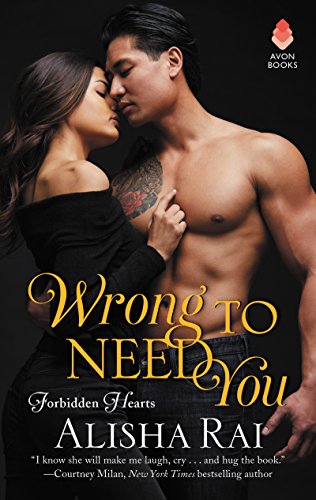 Wrong to Need You is the second book in the Forbidden Hearts series, which deals with the Kane and the Chandler families and their tangled and troubled history. Sadia Ahmed is Paul Kane’s widow (she never changed her name—yay!), which makes Jackson Kane her brother-in-law. That makes for a slightly awkward pairing for sure, which both characters are fully aware of.

Sadia runs Kane’s, the family cafe that Paul ran before he died. She also works as a bartender for extra money, because the cafe isn’t doing great. She doesn’t love owning and running it. She’s been admiring a stranger who’s been coming into the bar for a while. He’s buff and has nice hands, which she thinks is weird of her to notice, but I don’t. So she’s shocked when she finds out it’s none other than Jackson, her long-lost brother-in-law. He disappeared ten years earlier after being cleared as a suspect in an arson incident that resulted in the Chandler’s grocery store burning down. But it turns out things are pretty complicated (as you’d expect in a Rai book).

Sadia’s long-time cook has left the cafe and she’s desperately in need of a chef. As soon as he learns that, Jackson sort of forces his way into the job (not in a bad way). She’s hesitant but agrees for one day, which turns into a longer-term-but-still-temporary situation. Turns out he’s a chef (who knew? Not any of his relatives). Then she, against her better judgment, offers to let him stay in her garage apartment so he’s not stuck in a hotel for the short time he’s in town. Given who wrote this book, you can guess what comes next—some hot scenes. But again, it’s not all that simple. When Jackson learns something shocking about Paul, he’s hurt and his family troubles get stirred up. And when Sadia learns the same secret, it freaks her out, too.

One other aspect of the book that’s important is Sadia’s six-year-old, Kareem. He quickly forms an attachment to Uncle Jackson and both Sadia and Jackson want that relationship to continue. But as far as the two of them are concerned, they’re both certain they’re wrong for each other. As it turns out, that’s not the case. They just have to deal with lots of emotional turmoil to realize it’s okay, and even that dead Paul is probably okay with it, too.

If you like lots of angst, complicated family relationships, and steamy love scenes, you will enjoy Wrong to Need You*. Check it out.

*One tiny caveat. The family thing with the Kanes and Chandlers is seriously complicated. I had forgotten most of it since reading the first book, which left me going, Who? What? Huh? sometimes, so I’d recommend reading Book 1 not long before reading this one.